BOWIE – BERLIN   In 1976 Bowie moved to Berlin, he stayed in a flat and recorded right next to the Berlin Wall.  He worked with Brian Eno, who had just left Roxy.  They were influenced by the electronic music coming out of Europe – Kraftwerk, Neu and my favourite Tangerine Dream.  Using synthesisers and electric piano and guitars and drum machine they worked on instrumentals.  Bowie wrote words for a few of them but the resulting record LOW is mostly unsung.   It was a huge departure from anything which went before, Bowie was ready to lose his entire fanbase, who were still mourning the death of Ziggy.  But gradually he won almost all of them back and many more too.  The album roars in with ‘Speed of Life’ and the bleak ‘Breaking Glass’ – Bowie’s voice sounds distanced, detached, emotionless – like the music itself.  Even the single ‘Sound and Vision’ is bleak and dystopian.  Side 2 is completely instrumental, but I love it.  I can even remember the first time I heard the record, on a friend’s (brand new in those days) cassette player.  This sounded suddenly so modern, so fresh, so alien even.  And I couldn’t wait for the follow-up ‘Heroes’.

And, of course, it didn’t disappoint.  Side 1 is all sung and 2 is mostly instrumental.  Of course, the shock had worn off, and one could simply enjoy more of the same.  Although the sung songs with the exception of the classic title track seem a bit mechanical.  I like ‘Sons Of The Silent Age’ but not much else.  The instrumentals are if anything a bit mellower, except the bleak Neukoln.  In many ways I prefer Low as an album.  Lodger, which came out later in ‘1979’ is maybe better.  No instrumentals this time, but the sound is more varied; there is Turkish influence in ‘Yassasin’ and a classic vocal ballad in opener ‘Fantastic Voyage’.  He had a hit with ‘Boys Keep Swinging’  – but I particularly like ‘Repetition’ – a tale of family violence sung very tiredly.  This last album completed David’s Berlin trilogy and has consistently undersold – maybe people were just getting bored with it.  In fact, all three records, though loved by the critics, sold poorly.  David had certainly come a long way in just a decade, unrecognisable from his Space oddity days.

Although this record came out over a decade later All Saints slots in here.   It is a collection of David’s instrumental tracks – everything from Low and Heroes and a few film tracks and discarded attempts.  I like it ‘Crystal Japan ‘ is very good – it is quietly refreshing, the lack of vocals give you more time to think.  In many ways David has always been a painter; literally he painted paintings (rarely seen) but with his music he often paints in sound collages, the lyrics sprinkled like highlights over the base colours.

But maybe, lack of chart success, or just boredom – David moved on from the pretty bleak terrain of his Berlin period and sought out more conventional ‘Pop’ sounds… 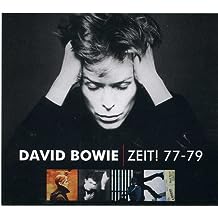