BOWIE – America  – Bowie was sinking into drug dependence; he had probably dabbled for years but Fame brings pressure – records to record, songs to write, endless touring and drugs seem to have affected almost all of the Sixties and Seventies stars.  Diamond Dogs came out in 1974, and I don’t really know why but I have never loved this record.  Most of the songs are of a dystopian future, many were destined for the soundtrack to a film of 1984, and then the producers chose other music.  The hit ‘Rebel Rebel’ was never my favourite and seems out of place on this record.  ‘Rock and Roll with me’ is quite good – as is ‘Sweet thing’ but the album leaves me strangely unaffected.  David was spending more and more time in America and, at exactly the same time as Elton, he fell in love with the disco sounds coming out of Philadelphia.  Under the influence of Luther Vandross and having dropped Ronson and the other Spiders (rather abruptly) he adopted a new band of session players.  Apparently the recording sessions were chaotic with a few songs discarded along the way.  John Lennon joined Bowie for a couple of songs too (as he did with Elton).  But the resulting album Young Americans is superb.  Never afraid to lose his audience and confront them with new sounds Bowie absorbed all this new music and created something brilliant.  The best is the title track with it’s horns and piano driven riffs, a classic – but it would have been unrecognisable as a Ziggy song.  There is the ballad ‘Win; again unlike anything he had sung before.  He does a cracking and roaring version of Lennon’s ‘Across the Universe’ and finishes with another classic ‘Fame’.  Quite incredible – and what a journey.  This is almost my favourite Bowie record – but of course there was more to come.

The following year (1976) came Station to Station – a move on from the Philly sound, and just 6 songs this time, but what songs…The title song roars in with the sound of a train puffing and wheezing, ‘TVC15’ is another wonderful song, almost a rocker but with disco influence – it is actually about 15 channels on TV (if only, now).  But the best are two slower songs ‘Word on A Wing’ and ‘Wild Is The Wind’.  Although we mustn’t forget hid best single in a long time ‘Golden Years’.  Bowie was filming ‘The Man Who fell to Earth’ with Nic Roeg, and he began to take on the persona of Newton – as the alien who came to earth.  He also name checks ‘The Thin White Duke’ and changed his image to a more forties style with slicked back hair and wide trousers.  Ever the magician he wove his spells – but for me it was always about the songs.   But none of his ch-ch-changes had prepared me for what came next. 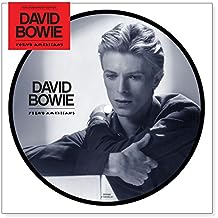