And why do I say elusive?  Because they are so bloody hard to find, on CD anyway.  They are also a rarity in that they sing in English, or Scottish rather.  And by that I mean they have never been seduced into singing in some transatlantic or American style, but prefer to just let their natural voices sing.

They started off as staff songwriters for Apple, the Beatles company, in the late sixties, writing songs for Mary Hopkins among others.  They formed a band with two others and called themselves McGuinness Flint and had minor success with two albums and singles.  Inevitably the band split and Gallagher and Lyle struck out on their own.  Their first two albums were almost exclusively acoustic, full of gentle lyrical whimsical songs, telling of English boarding houses and growing up in Scotland.  They were a part of a movement never really recognized as a sub-genre but which included The Sutherland Brothers, Jonathan Kelly, Nick Drake, John Martyn and even Colin Blunstone – who created a particularly ‘English sound’.  Not exactly folk but not rock either, something in between, but elegant and melodic and beautifully sung in unapologetically ‘English’ voices.

More albums followed, and slowly they became a bit rockier, a bit more dancey and mainstream until their breakthrough album ‘Breakaway’ which brought them fame and hits.  A couple of albums followed but then they just stopped.

I am not sure if they fell out with each other, or if one or the other or both got fed up with the constant demand for hit albums and singles and the whole music business, which treadmill that it is, demands constant running – or you fall off.  I believe they just chose to step off.

And since then – practically nothing.  They have apparently re-united for a few gigs in their native Scotland, but have no plans to record any new songs.  Maybe they just ran out of things to say.

Their albums were all released on CD in 2004, which, assiduous reader of the music press that I am, I missed.  And now they are rarities and second hand copies go for over £50 a copy.  Yesterday I went on e-bay, and one of their albums was available on CD for under £10.  I bid and so far am still the highest bidder, so fingers crossed, as I wait for the elusive Gallagher and Lyle. 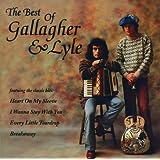