I can still remember the moment I first heard Michelle Shocked, it must have been in 1988.  It was in my Dad’s car, I think he was taking me and my daughter Lydia to the railway station in Wokingham after a visit.  The song was ‘When I grow up’, and I had never heard anything quite like it before.  Great bass notes and a simple strummed melody and a beautiful voice singing almost nonsensical words about having hundreds of babies.  For once too I caught the announcer saying it was by Michelle Shocked.  I cannot say exactly what it was that captivated me but I suppose it was just the honesty of her voice, unaffected and refreshingly different.  So, I bought the album ‘Short Sharp Shocked’ with its iconic cover and have played it ever since.  Michelle was apparently discovered at a small festival in Texas and recorded and was instantly signed to a small independent label “Cooking Vinyl”.  This was her first record, but apparently she had already written the songs she planned for her first three albums long before she had a record deal.  And this was not precociousness but simply what she knew and how she wanted the records to sound.

Well, the campfire tape was eventually released, but Michelle followed Short Sharp Shocked with “Captain Swing” – a more jazzy record and “Arkansas Traveller” – A country tinged album.  Both are brilliant and almost as good as her debut.  But I always return to songs like ‘When I Grow Up’ and the gorgeous ‘Memories of East Texas” where she describes learning to drive around red clay back roads, and my very favourite ‘Anchorage’ where she sings a simple letter from a friend who had moved “You know you’re in the largest state in the Union when you’re anchored down in Anchorage, Anchorage Alaska”.

But Michelle has always been controversial and left her label acrimoniously.  She has had a sporadic career since, releasing albums mostly on her own label and became a born again Christian.  But she still had some great music in her… 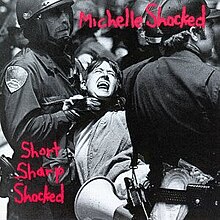