Forget Springsteen or Dylan or even Sinatra or Elvis, John Stewart is the true voice of America.  He was a bit older than most of the singer-songwriters of the late Sixties and early Seventies.  He had been in the Kingston Trio, a folk group popular in the late Fifties and early Sixties; he wrote many of their songs and played guitar and sang. Inspired by the success of Dylan and others he went solo in 1968 and released a string of wonderful records, ‘California Bloodlines’, ‘The Lonesome Picker Rides Again’ and ‘Cannons in the Rain’ among others.  Prolific is too weak an adjective; John released over 40 studio albums in his solo career – and I am still chasing some down. He sounds a bit country and a bit folk, and occasionally he really rocks too.  But he is a superlative songwriter, often singing about the American West; Montana, Kansas, Omaha, Missouri – and in one song he literally namechecks a whole host of American states.  But he is no redneck cowboy, his songs are full of hope and the hardships of life, and growing up in America.

He was no Republican either, he joined Bobby Kennedy’s campaign in ’68 and was there when he was killed.  He wrote “Daydream Believer” which the Monkees picked up on and made into a hit, and wrote hits for many other artists. He carried on writing and touring until he died in 2008 while on yet another tour.  He often sang duets with his wife Buffy Ford.  I first heard him on Noel Edmund’s Sunday Radio Show, just before he went to the Breakfast slot.  Whether it was Noel or his producer who chose the ‘album of the week’ and ‘artist of the week’ I do not know.  But through him I was introduced to Dory Previn and Jackson Browne and Judee Sill, as well as more famous names like Neil Young and Joni.  And of course John Stewart.  He flirted with fame on a couple of late Seventies albums about Hollywood; strangely these are now impossible to find in almost any format but they were big hits at the time.

I am slowly working my way through my thirty-odd records of his.  And I love every one. 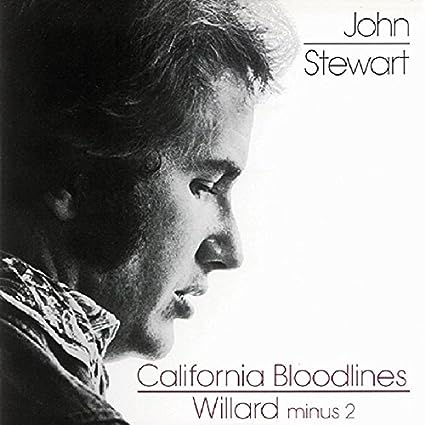