I never really got jazz.  I suppose I considered it a bit like Abstract Art.  How can you tell if a mistake has been made?  Was that splash of red in the corner deliberate; was that blast of Sax intentional – and more basically, were the musicians even playing the right notes?  Joni Mitchell started off as a fairly conventional singer-songwriter, though a brilliant lyricist or even poet.  She started using strange and open tunings and gradually from ‘Court and Spark’ onwards she got jazzier and jazzier, culminating in ‘Mingus’ which took some getting used to.  But always holding it together was her voice and her wonderful words and I learned to love ‘Mingus’ too  She veered back to a more conventional style in her later records which sadly I think were slightly inferior.  Still, an incredible artist, and currently slowly recovering from a brain aneurysm which nearly killed her.

I am currently listening to ‘River – The Joni Letters’ by Herbie Hancock.  It is his jazz interpretations of a few Joni songs with (mostly) guest vocalists but including Joni herself on The Tea Leaf Prophecies.  And it is a lovely album.  I sometimes struggle to discern the, or indeed any, melody but the words keep me hanging on in there and I am learning to “hear” Joni in a different way.  The last track and the reason I bought the record is Leonard Cohen reciting ‘The Jungle Line’ to a lazy piano backing.  This was actually a quite early song of Joni’s, from ‘Hissing of Summer Lawns’, and though I had always loved it I never understood the lyrics.  Even with Leonard’s smooth voice slowly enunciating each syllable I still don’t really understand it.  Not that that matters at all; the words are still incredible, as is Leonard’s vocal delivery.  I probably will not buy any other of Herbie Hancock’s records and will still mostly avoid out and out Jazz.  But this is now definitely on my Favourite list.  Incidentally (for all you anally obsessed collectors like me) I will file it along with Joni’s music and not under H. 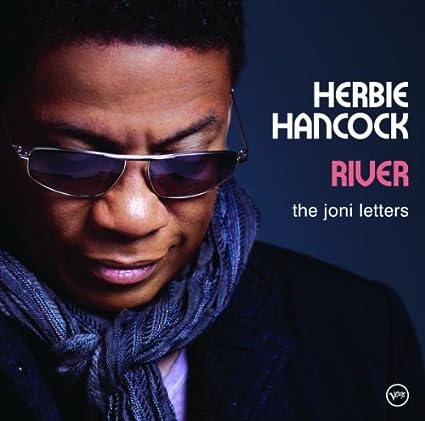