The Beautiful South – Miaow was the next album and again a very accomplished record, their sound seemed to be expanding too, a bit more brass, a fuller sound.  And Jacqui’s vocals are so languid, so gorgeous, especially on ‘Everybody’s Talkin’ (Which was originally a hit for Harry Nilsson).  There is almost a country twang to her voice – simply lovely.  Other great songs are ‘Good as Gold’, ‘Hold On To What’ and ‘Mini-Correct’ and ‘Prettiest Eyes’.   – though really, not a bad song on the record.  This was the most professional record to date.

They followed it up quickly with a greatest hits collection ‘Carry On Up The Charts’ which collected all their singles.  It was a massive hit (Number 1 album) and sold over a million copies.  But the real treasure was disc 2 (in the deluxe package), which was all the ‘B’ sides.  It is here that the treasure lay; those tracks made to fill up the space on CD singles, tracks too bizarre to go on an album but revealing the group in a more adventurous and innovative style.

1996 saw Blue Is The Colour, a more assured and varied record.  A massive hit album with ‘Rotterdam’ the very rude ‘Don’t Marry Her’, ‘Blackbird on the Wire’ and almost my favourite the ode to alcohol from Paul Heaton – ‘Liars Bar’, sung in a growl.  Quench followed this; maybe their best album – who knows; I like it anyway.  Every song is good, but especially ‘Perfect 10’  ‘The lure of the Sea’ and my favourite ‘The Slide’.   They had really hit their stride – and yet, at least I felt – there was no real progression.  Musically they were a bit more varied, but most of these songs could have been on their first album and vice versa.  In the Sixties and Seventies, bands progressed, each record surpassing the previous one.  That all seems to have stopped now, an Artist stays in the grove they have sold well in – until someone else comes along I suppose.  Oh Well.

Painting It Red – Quite poor actually, don’t know what happened to the group but a poor album.  Gaze was much better, but you could almost hear the sound of water being trodden;.  I have just listened to (on Youtube) and ordered Goldiggas, Headnoddas and Pholk songs – an album of covers which, tired of the band I neglected to buy when it came out in 2004.  It is really quite good so looking forward to playing it.  Their last album was Superbi.  Again it is okay, but I felt the band wasn’t really going anywhere.  Their best days were behind them, their audience had moved on, or just wanted to hear the old songs.  A very common problem for bands.  And so in 1997 the band broke up.  Paul Heaton (see H) still continues and has recently teamed up with Jacqui Abbott to tour the old stuff.   My trouble is that I am a completist – I have to have everything if I really like someone.  But, no regrets.  The Beautiful South were a breath of fresh air at the time. 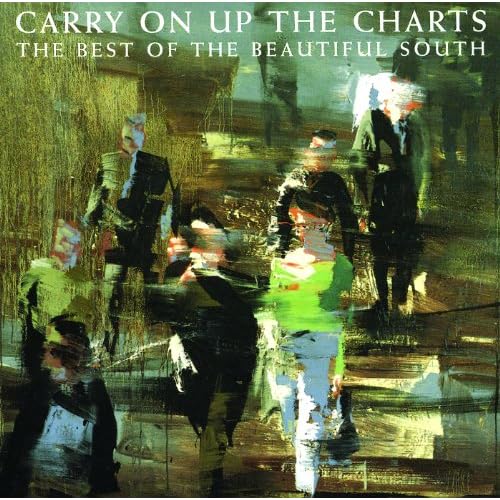