Welcome to the Beautiful South – was a slow-burner.  My partner at the time had the album with it’s controversial fellating gun cover.  But ‘wit’ was always an essential part of The Beautiful South – even the name was a joke as they hailed form the North.  But what a refreshing record it was.  1989 was not so memorable for great records but his was one of them.  The band was really Paul Heaton and Dave Hemingway, former members of The Housemartins, who had some small success.  They were joined by Dave Rotheray on guitar and an ever changing rota of other band members including female vocalist – who were always an essential part of the mix.  For me, although the music was always good and the melodies superb – it was Paul Heaton’s lyrics, ascerbic and self-referencing, biting and funny which hooked me.  Quite apt that this band should follow The Beatles, as in many ways they carried on the tradition of very clever ‘pop’ songs, none of which were ever like any of the others.  On this their debut are ‘Song for Whoever’ ‘You Keep It All In’ and my favourite ‘Woman In The Wall’ ( a light-hearted song about a murdered womand going rotten buried in the wall – bizarre but brilliant).

Choke soon followed, and despite the brilliant single ‘A Little Time’ (a breaking-up duet with gorgeous barbed lines {tongues so sharp the bubble burst}) it seems a slightly poor follow-up.  It does have some good songs ‘My Book’ and ‘Let Love Speak Up Itself’ – but somehow the whole record feels a bit flat to me.  0898 came out a year later; and it is again a quality album full of sharp witty ‘pop’ songs.  Favourites are ‘Old Red Eyes Is Back’ and ‘We Are Each other’  – they also had a rambling sort of song which I particularly love  – ‘You Play Glockenspiel, I’ll Play Drums’.  There was one controversial song ‘36D’, which purported to be about Glamour Models and their exploitation but became a sort of celebration of that.  Briana Corrigan, the girl vocalist, left – partly to pursue a solo career but also because of the perceived sexual politics within the band.  Who knows, but she was replace by Jacqui Abbott who stayed with the group to the end. 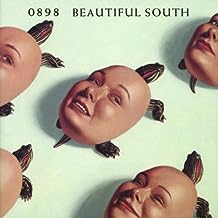