The Eagles.  Wow, another huge band with massive record sales.  I simply adored them right from the start and had all their albums.  I recently bought a CD box set of their studio albums.  They played almost the first real Americana, or modern country music,  Gram Parsons (see P) had taken The Byrds (see B) in this direction but for whatever reason it took a few more years before this sound really took off.

First Album released in 1972, simply self-titled is faultless, as they all are really; I can’t think many bad Eagles tracks. The band were unknown but producer Glynn Johns turned in a great record from just four original members; Glenn Frey (see F), Don Henley (see H), Randy Meisner and Bernie Leadon.  All were great musicians and songwriters and each could sing really well – though they did seem to sound almost exactly the same.  Almost immediately came the “Eagles” sound – a laid back easy country rock groove with delicate harmonies.  Best songs “Train Leaves Here This Morning”, “Take It Easy” and “Witchy Woman”.  A brilliant start – though they didn’t really achieve fame until album number two,

Desperado This was the ‘Concept’ album, the life and death of an outlaw.  Another great batch of songs and only 35 minutes long; immediately you want to replay the record.  Great songs – ‘Doolin Daltons’, ‘Tequila Sunrise’, ’Bitter creek’ and ‘Desperado’.  The album cements the outlaw myth brilliantly and is filled with sadness but some great faster songs too.   The band were now writing songs together, especially Henley and Frey – but also two non-band; J.D. Souther and Jackson Browne (see B) who never joined but wrote with the band occasionally.  This is probably my favourtie album – it is all of a piece which I like.  But they were changing.

And their next record On The Border was a bit harder, a bit rockier, a bit less ‘country’.  It sold much better, but in a way as they spread their canvas maybe they lost a little something.   Not that this is by amy means a poor album; some great songs – ‘Already Gone’, ‘You never Cry Like A Lover’ and the big hit ‘The Best Of My Love’.  The band were now almost invincible with Number 1 singles and they chased fame down the road.

The following year they were even more successful with One Of These Nights. And although this album had four brilliant songs – the title track, ‘Lyin Eyes’, ‘Take It To The Limit’ and ‘After The Thrill is Gone’ – I don’t really love the record.  A bit too stylish, a bit too slick, too disco, too commercial.  And the band were indulging in industrial consumption of cocaine and disagreements led to the departure after this album of Bernie Leadon, who was the country influence and a major songwriter.

The band drafted in Joe Walsh, who already had a solo career and a couple of big hits of his own. And yet the result was probably their best and certainly their biggest hit album.  Hotel California was a triumph.  The whole record sparkles with brilliancy; the songs are cynical and a touch world weary and yet they are great sing-alongs.  The title track sums up the whole feeling in 1976 of things going bad, poltically and in music.  Punk and Disco between them were threatening to make old-fashioned ‘Rock’ bands redundant – and yet The Eagles rose above it and created a masterpiece.  Almost all the songs are superb but I particularly like ‘New Kid In Town’, ‘Wasted Time’ and ‘The Last Resort’  which is almost a companion piece to the title track.  And yet the band were in serious trouble and Randy Meisner, bass player and founder member departed after this record.  This just left Frey and Henley as original members.

It was three years before the next record emerged The Long Run.   This was intended as a double but emerged as a single record.  I wonder given the few poor fillers how bad the rejected songs must have been.  The title track is good and ‘Sad Café’ is another dystopian ode to America and the Sixties; and ‘King Of Hollywood’ is good, incidentally telling us what we already knew, which is why the recent Harvey Weinstein revelations should have come as no surprise.  Incidentally Dory Previn around the same time wrote about the same stuff.  But although eagerly anticipated the album disappointed and apart from the occasional money-making World Tours every decade or so they called it a day.  Frey and Henley released pretty decent solo albums but on their own they weren’t half as good as together.

And then a surprise – a new album Long Road Out Of Eden in 2007.  A double album of mostly softer gentler songs, but although it is beautiful it seems a bit lost really.  Maybe they made the record just to prove they still could – but it seemed they had nothing new to say really – and time had moved on, as it always does, and one questioned their relevance.  Despite that it was number 1 in America and the UK and made them lots of money.  But as a double it was certainly too long; two single reocrds a couple of years apart would have been a better idea.  And as I am listening again I do quite like it – best songs; ‘Busy being Fabulous’, ‘What Do I Do With My Heart’, and the title track.

Of course I also have the obligatory Complete Greatest Hits (2003) A pretty good collection though a bit too heavy on Hotel California and The Long Run.  There is also a track ‘Please Come Home For Christmas’, which was a single and three live tracks; the excellent ‘Seven Bridges Road’, and ;Get Over It’ and ‘Love Will Keep Us Alive’ (pretty bland).  Also one new song ‘Hole In The World’ (average).  So that’s it. 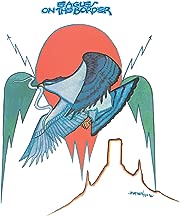