One of the lesser lights, but still she shines brightly.  A veteran really of the Americana music scene.  She was born in 1953 and released her first in ’79, when she was already 26.  Sporadic releases through the eighties and nineties brought her little success, but she seemed to be making a living out of music somehow.  She wrote a song “Passionate Kisses” which was covered by Mary Chapin Carpenter, and went on to be a massive hit.  This song seemed to open the doors for her, both creatively and commercially.  In 1996 she released what is probably her masterpiece “Car Wheels On A Gravel Road”.

She managed to fuse rock and blues and country in a unique way.  Every song is a joy, including one called ‘Joy’.  She has an edgy almost raspy voice, full of East Texas drawl which somehow suits her songs perfectly.  In some ways she is similar to Tom Petty – that hint of sarcasm, or world weariness.  You cannot imagine her smiling as she sings.  I have never seen her live, and only a few photo’s too.  Most of her songs are about broken hearts or love affairs gone wrong.  In fact one album is called ‘World Gone Wrong’.

I only have three albums of hers, and ‘Car Wheels’ is by far the best, though they are all listenable.  Try listening to ‘Lake Charles’ or ‘Concrete and Barbed Wire’ on youtube. 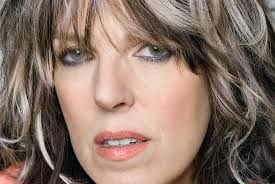