In my early twenties I read quite a lot of Swift, that great 18th Century satirist.  Besides the famous Gullivers Travels he also lampooned the Government of the day with several seriously written proposals to solve problems, one of which was to eat young babies; perfectly argued and logical it was too.  A feeling of déjà vu has returned like a rush of blood to the head, which I am sure Mr. Osborne must have also suffered recently, upon living through the great 2012 pasty tax fiasco

It must have seemed such a cracking wheeze to raise a few millions more by taxing food kept warm for takeaway consumption.  It soon became known as the Pasty tax, and immediately started to present a few problems.  The tax would be levied if the product, and let us for convenience sake call it a pasty, were served at above ambient temperature.  But as so often the devil is in the detail; if it was a particularly cold day almost everything would be above ambient temperature; how long would a loaf of bread have to be left to cool down before serving as a ‘warm’ product; if it was a hot day it might be that the pasty would be below ambient temperature.  Greggs the baker mounted a campaign to get rid of the tax, and the press got behind it.  For weeks the Government suffered bad headlines and the words ‘Pasty Tax’ must have caused disturbed night’s sleep in Downing Street.

Then , out of the blue, just as the sun comes out and people have stopped eating, or caring about the price of, pasties, the Governments shoots itself in what is left of its feet by announcing a change, a u-turn of momentous proportions and the ‘Pasty Tax’ is no longer a ‘Nasty Tax’ but a ‘Kept Warm Tax’.

So, now if you buy a pasty, fresh from the oven, but still hot – no tax.  If you buy a pasty kept warm on a hot plate – tax at 20%, if you buy a pasty let go cold, congealed fat and all – no tax.  You couldn’t make it up, and even now it is sure to present inconsistencies, if for example the pasties are kept warm in Styrofoam containers but not heated by any source other than their own latent heat, or if the pasty is served cold but customers are invited to use a complimentary microwave to heat up their pasty.

But three cheers for George Osborne, I haven’t been this amused since Chris Huhne’s ex-wife shopped him for asking her to take the rap for a speeding fine.  Keep up the good work boys. 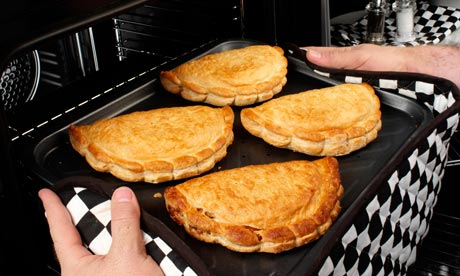