For Nick Clegg at least, and to be fair to him, his acceptance of the YouTube parody of his apology has been quite gracious.

But this is, upon examination, more than a bit generous with the truth.  He must have known before the election, unless he believed his own rhetoric, that barring a miracle he would not actually win the thing.  Therefore he knew that if he had any chance of being in Government at all it would be as part of a coalition.  He also knew that this was far more likely to be with the Tories than with Labour, even though traditionally his party has been to the left of Labour on many issues.  He also knew that he would, when negotiations began, if he was indeed in the lucky position of being part of a coalition at all, be able to state his ‘red lines’ – that is those things which must be sacred and which his party would not compromise on.

Apparently then, either his team were poor negotiators, or they did not decide that the only thing they had made a cast-iron pledge on was important enough to have made a stand on.  Despite the pitiful hand-wringing and ‘heartfelt’ apologies everything in politics is down to choices.  And when it came to it, they chose not to honour their pledge.  The money could have been found from somewhere else, some other cut or tax, had they stood by their word, and simply refused to allow the Tories to increase the fees. 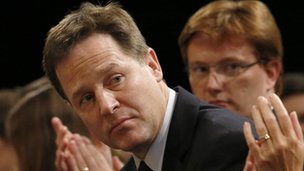