E L O (Electric Light Orchestra)– well…anther biggie, in fact at the height of their popularity they were Massive – and still are.  Roy Wood, Jeff Lynne and drummer Bev Bevan had all been in Roy Woods band The Move who had been quite successful in the British charts in the Sixties.  But the band was falling apart and this trio decided to create a new group which would attemot to amalgamate Classical and Rock music,  This was being done by several bands and most successfully by Barclay James Harvest, almost my favourite band ever.  Their first album, released in 1971 was self-titled but due to a mix-up it became known in America as No Answer. To say that the album was more experimental than accomplished is pretty accurate.  There are a few tracks (mostly by Jeff Lynne) which are better, especially Mr. Radio.  However the preponderence of cello heavy tracks by Roy often seem unfinished and just too chaotic to really enjoy, although opener 10538 Overture is passable.

Now, I got into E L O a couple of years later as the great singles started to hit the charts.  I bought about five of their L.P.s in the Seventies.  But a couple of years ago I bought a box set of all their studio albums (it was really cheap, honestly) and have worked through them.  Their second offering was entitled ELO II (not to be confused by a few members of the band who broke away in the Eighties and called themselves by this moniker.)  So, the difficult second album – and it was complicated by the departure as they were recording of founder Roy Wood, who went off to from Wizzard.  Jeff Lynne recruited Richard Tandy to play piano and a couple of others for violin and cello and soldiered on.  To be honest the album is a bit poor.  Except for the brilliant version of Chuck Berry’s ‘Roll Over Beethoven’ the tracks are overlong and a bit boring.  Still it was becoming clear that Jeff Lynne was now the leader of the band, writing most of the material and helping with production.  It was only on their third album ‘On The Third Day’ (1973) that they started to get into their stride.   The songs were shorter, more punchy, and the production seemed better, less chunky and a new violinist and cello player added quality.  But as ever, it was the songs themselves that made the album;  ‘Ocean Breakup’, ‘Showdown’ and the out and out rocker ‘Ma Ma Belle’ all topped off with a cracking version of the classic favourite ‘In The Hall Of The Mountain King’.  In contrast Roy Wood’s Wizzard were plodding along with only a couple of hits – oh well.

’74 saw their 4th album – the superb Eldorado.  This was the first of their really great period; at last they were a really professional band.  They still had the orchestral bits were moving much more into a straight rock style.  Unbelievably the songs just got better and better and with Jeff Lynne now producing everything, writing all the songs and singing and playing guitars it was becoming almost a solo project. The album ha no poor songs at sll, and just rolls along at a pace, it feels like a concept album.  Best songs – ‘Can’t Get It Out Of My Head’, ‘Laredo Tornado’ and ‘Mister Kingdom’ – not to forget the superb title track.  The album was actually recorded with a full orchestra and is almost symphonic, especially in the three Eldorado sections.  A great step forward.

And yet, Lynne then started to move the band into a more commercial direction with their fifth album FaceThe Music.  The songs were more memorable and the record was their first to go Platinum.  There had been a couple more personnel changes and as usual this was in all but name a Jeff Lynne solo album.  The orchestra were still there but a bit muted on some songs, there were also girl singers complementing Jeff’s singing.  Best songs ‘Strange Magic’, ‘Evil Woman’ and ‘One Summer Dream’.  A gorgeous record, a huge hit and already ELO were being compared to The Beatles (which obviously Jeff loved and would later end up working with George and on two lost Lennon songs on Anthology).   They followed this with A New World Record (1976).  This was another superb album full of great songs and sumptuous melodies, released incidentally at the height of punk, which threatened to blow away all these old pop-rock dinosaurs; well, extinction came a bit quicker to punk.  Well, what can we say – another very good album, although strangely not a real favourite.  Best songs – ‘Telephone Line’, ‘Rockaria’ and ‘Livin’Thing’.  It seemed that ELO could now do nothing wrong – and still the best was yet to come.

Jeff Lynne followed this up with a huge double album which topped the charts worldwide and remains his masterpiece – ‘Out Of The Blue’.    Wow, what an album – a double and almost too long really, it is ELO’s Sargeant Pepper, without the psychedelia.   There isn’t a poor song on it.  Hard to pick best songs as they all just roll on and on, each better than the last.  Possibly ‘Turn to Stone’, ‘Wild West Hero’ and of course ‘Mr. Blue Sky’.   Superlatives fail me in this perfect mix of ‘Pop’ and ‘Rock’.  A great achievement.  And this really was the pinnacle, though Jeff did continue making great ELO and solo records – and, has recently returned to making albums as ELO, after many years a a top producer (George and Travelling Wilbury’s among others).  I haven’t really caught up with his output of late – but you never know. 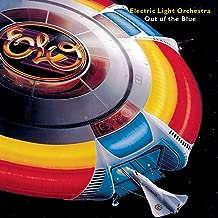