I am sure I wasn’t alone in thinking that Leonard had called it a day; gone out on a high at least; that there was nothing more he wanted to say, no more wisdom to drop into our ears, no more records.  And quietly the record came out Ten New Songs.  This was the result of a collaboration between Leonard and one of his singers, the sublime Sharon Robinson, who co-wrote and sung on the songs; I suspect she wrote the music.  And this, of all Leonard’s record is the smoothest, the most similar – in fact the music is almost all of a piece and the same pace throughout.  Leonard’s words, almost whispered now pass you by like weeds in a stream, floating past and hypnotizing, but very few actually snag and stick in your brain.  A beautiful record even so, but though I do like listening to it (personally I would buy an album of Leonard farting in the bath) it is not, for me, in the top league.  Best songs ‘In My Secret Life’, ‘Boogie Street’ and ‘Alexandra Leaving’.  I have to struggle to remember a line, but ‘I fought against the bottle, but I had to do it drunk’ sticks somehow.

Two years later (2004) came ‘Dear Heather’, maybe the strangest record in his entire career.  There were two or three tracks from the New Song recordings, a couple of new songs, a live track and two spoken poems to a mild jazz background, one not even written by Leonard.  One got the idea that this was scraping the barrel a bit.  Even so, with sub-standard material it was still a delight to listen to those whispery vocals.  Best songs ‘Undertow’ and ‘The Faith’.  But even Leonard knew. He has barely ever sung these songs live.

Then a couple of years later Leonard discovered that his long-term accountant had absconded with most of his money.  Leonard decided to crank the ‘live’ machine up and embarked at the tender age of 73 on a World Tour.  And it was a brilliant success, his band never sounded better – and he was on top form; for once he seemed to be enjoying the experience.  A slew of live albums followed, as did the tours. I saw him at the O2 in London and the album ‘Live in London’ is a double and features practically the entire show.  Brilliant.

But, maybe singing live had envigorated him, he released a new album ‘Old Ideas’,  We had all been hoping for some more drops of wisdom, or whatever we thought his work might be.  But he was in his late 70’s and I suppose we wanted him to go out on a high, or at least to not embarrass himself.  Well he didn’t.  The record is not one of his very best but it is far from poor.  Producer Patrick Leonard seems to have got something out of the old boy. Best songs, ‘Darkness’ and ‘Different Sides’.  Best lines ‘We both say there are rules, but frankly I don’t like your tone.  You want to change the way I make love, I want to leave it alone.’

And another drop from the bottle arrived a couple of years later with ‘Popular Problems’.  Not really anything too exciting, but still good.  Best songs ‘Slow’ and ‘Never Mind.’  In a way I am still absorbing these later records – the old ones have been played hundreds of times.

Best of the live albums was ‘Can’t Forget’ – two new songs and two covers.  Not bad for the old guy.   The new songs are okay, treading water rather than pursue new paths but a nice record.  I especially like the song ‘Choices’.

Of course, over the years I have bought various Greatest Hits and even a covers album called ‘I’m Your Fan;.  All good but no surprises.  Somehow that doesn’t even matter.  And madness or what, I recently bought a box set of his studio albums – all of which I already own, and which will remain unopened as I have all his records saved on computer and memory sticks.  Such is the nature of worship.

Book of Longing – is an album by Phillip Glass where he re-interprets some of Leonard’s poetry and songs.  I am not either knowledgeable or a big fan of classical pieces but I quite like what he has done here.  Leonard even recites a couple of poems – lovely to hear that voice again.

Then he stopped touring as he approached his eighties, and rumours of ill-health started to emerge.  His one-time lover and father of his children and subject of one of his best loved songs, Marianne, was near death and he sent her a public message that he wouldn’t be far behind her.  We knew he was still writing, still attempting to distil beauty and wisdom from the mud of existence.  And just like Bowie a year earlier he released his final album just days before dying.  ‘You Want It Darker’ is an almost whispered prayer; Leonard had returned to his Jewish roots with synagogue choirs on a couple of tracks.  His voice is almost shot and he almost recites the songs. I am still absorbing the record really.  It is pretty good, though impossible to compare with his earlier wonders.  I like the first couple of songs on the record but even if it were a bad record I would still treasure it I am sure.  His son Adam produced the album and there are rumours that a new posthumous album is in the offing.  We will see.

All in all, though this is a hard one – Leonard is probably my very favourite artist, and that is because he has managed to combine two art-forms, poetry and music; maybe only Dylan and Joni come near to that perfection.   So, I say Goodbye, but only for so long.  I always return to him, especially in times of darkness.  In many ways he has been my comforter and friend. 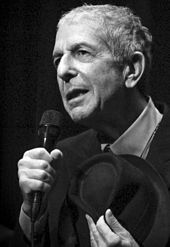