Help was a pretty daft film, but the songs were just getting better and better.  The accompanying album was pretty good.  One cover, the splendid Dizzie Miss Lizzy.  This record of course included ‘Yesterday’, possibly the most famous McCartney composition but not one of my real favourites.  Best songs ‘You’ve Got To Hide Your Love Away’, ‘You’re Gonna Lose That Girl’ and ‘I’ve Just Seen A Face’.  You get the feeling that this record was a bit rushed, though I think they were working on 4 or maybe even 8 tracks now.  The boys sound a bit tired. 34 minutes and 14 songs.  This should be regarded as the last of their early albums where songs were written on the road and a quick dash into the studio to record and get another album out.  This was still only two years since the mania began.  From now on they would take longer in the recording process, often completing and developing songs in the studio itself.  Touring was cut back a bit too, and much more of their time was taken up recording.

The result was that the Christmas Album of 1965 was Rubber Soul.  And this was like no other Beatles album so far.  The cover showed a slightly distorted view of the (by now) quite longhaired Beatles.  A new look and a new sound.  Much heavier, much more varied in sound, more echo on the vocals.  And the songs were more interesting too. It is always debatable whether the Beatles simply stole trends or if they picked up new ideas and developed them into something new, which others then followed.  I favour the latter.  The Byrds in America had taken a Dylan acoustic song and recorded it with electric guitars.  And Electric guitar was changing too; early on it had been little more than an amplified acoustic, then it sounded tinny – but by 1965 it was sounding heavier, more distorted notes, more tremeloe, and soon we would be in the realm of guitar heroes, Jeff Beck, Eric Clapton and Hendrix of course.  This album was on the cusp of this new sound.  The Beatles were in the forefront of the new sound of ’66.  The best songs ‘Norwegian Wood’, ‘Michelle’, ’Girl’ ‘I’m looking through you’ and ‘Nowhere Man’.  But we must not forget Lennon’s masterpiece ‘In My Life’.  Almost the perfect album and still only 35 minutes long. 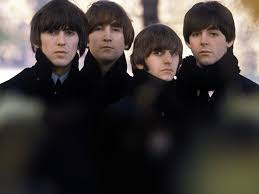