The end of 1964 saw a brand new Dylan.  First track of his new Album “Bringing it all back home” was the splendid ‘Subterranean Homesick Blues’. It was rock’n’roll, it was almost punk, it was almost rap – but it was undeniably still Bob Dylan.  The album contained many of his best songs including “Mr. Tambourine Man”, but he was backed by a group, which not quite hard rock was pointing in that direction.  Everything was moving fast, The Beatles in England were recording “Rubber Soul”, bands like the Stones and the Who were breaking through.  In California The Byrds took Mr. Tambourine Man in another direction, and everywhere music was exploding and expanding and changing.

In 1965 Dylan came out with “Highway 61 Revisited”, on the cover he was pure Rock’N’Roll now and so was his band.  First track was ‘Like a Rolling Stone’ – a single and at over six minutes long unheard of.  It was so good it got played anyway and became a massive hit.  The album like it’s predecessor was crammed with great songs.  It seemed as if Dylan couldn’t fail – everything he touched was gold.  The final track was the brilliant eleven minute long “Desolation Row” – as if this was the place that the young of the world were in, and had to escape from.  Dylan had escaped from the folk scene and was now hailed as a rock-god, the voice of a generation.

“Blonde on Blonde” came out on 1966 and Dylan went on the road with “The Band” to very mixed reactions, someone in London even shouting “Judas” at him.  Dylan’s answer “I don’t believe you” was a throwing down of the gauntlet.   This double album was his best yet “Rainy Day Women” “Just Like A Woman” “Stuck Inside of Mobile” and “I Want You” – one after another the great songs poured out – and they were pure poetry too.  My favourite was “Visions of Johanna” with the brilliant line ‘the ghost of electricity howled from the bones of her face’.  And the final side was a love-letter to his new wife Sara Lowndes – ‘Sad-Eyed Lady of the Lowlands’.

Dylan was supreme, he was unassailable, the world was his.  And then it all stopped….. 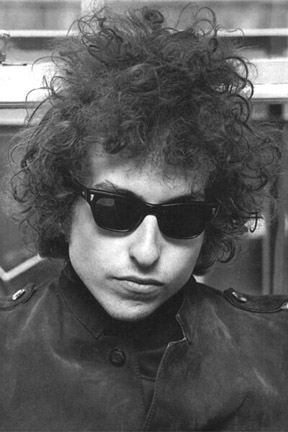