A long wait between albums has become a trademark of Leonard Cohen, with always the fear (or hope) that the last album was indeed the last album.  It was five years between Recent Songs and Various Positions and then another four until his 1988 masterpiece “I’m Your Man” – a self-referential joke, but also a brilliant and very sexy song.  The whole album was on another level, very modern with a sharp and brilliant production and a batch of songs that are almost without parallel.  “First We Take Manhattan” is dark and sinister and almost a rock song, although I have never quite understood the lyrics.  There are great ironic love songs “Ain’t No Cure For Love” and “Everybody Knows” , A translation (or re-writing) of a Lorca Poem “Take This Waltz” and last but not least “Tower of Song”, in which Leonard admits he is a hundred floors beneath Hank Williams and is blessed with the gift of a golden voice, which in concert always raises a cheer.  The song is simply brilliant and Leonard accompanies himself on a small synth keyboard where his tiny arpeggio of notes chimes in the mind as if it were a full orchestra.   The album resurrected Leonard from the relative obscurity he had slipped into and he gained thousands of new fans.

But they, just like us had to wait another four years for his next offering with the ominous title “The Future”.  Again there were fast songs, “The Future” itself, and “Democracy” where Leonard takes on these huge ideas; ‘Democracy is coming – to the USA’ was the soaring chorus line.  There were also classic songs such as “Anthem” with the wonderful line ‘There is a crack, a crack in everything – that’s how the light gets in’.  Another beautiful haunting song “Light as the Breeze”; a Country and Western romp which many have chosen to be buried to “Closing Time”; a couple of covers and even an instrumental “Tacoma Trailer”.  In some ways it is a more rounded album than “I’m Your Man” and the two serious songs “Democracy” and “The Future” show what a philosophical poet Leonard was.   These two albums were followed by massive World Tours that left the public waiting and begging for more.  But Leonard was set to disappoint them; in his never ending search for spiritual enlightenment he spent many years on Mount Baldy studying Zen Budhism with a monk known as ‘Roshi’

The general view was that Leonard had retired, that he had nothing else to say and had left the stage.  However a personal disaster where his Accountant ran away with almost all his money may have caused a rethink……. 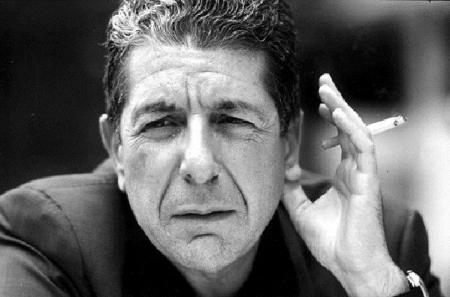