All parties have indulged in re-branding.  We had New Labour, where Tony Blair successfully re-positioned Labour in the centre of British politics.  We had Cameron’s partial success with his Compassionate Conservatives, cuddling hoodies and embracing the Health Service, whereas of course in power they have reverted to type.  The Liberals who merged with the Social Democrats to form the Lib-Dems, was a re-branding in itself.  And Ed Milliband has begun his One Nation Labour rebranding after New Labour got tainted with Iraq, and economic failure.  But one of the biggest re-brandings of recent years was Brand Clegg.

With his startlingly ‘honest’ good looks and direct to camera trick of saying ‘I am different, believe me’ he almost stole the last election.  He certainly fooled a lot of people, but the brand has suffered ever since.  Going into coalition so readily with the Tories, and at such a cheap price; they could have insisted on proportional representation as a pre-condition, not just a referendum they were bound to lose.  Then the scrapping of the University fee pledge was a huge blow to Brand Clegg, and the wonder is that he thought he could get away with it.

His apology last Autumn was again a bodged job; he never apologized for deceiving people but for offering a policy he ‘knew’ he couldn’t keep to once in Government, that very policy by the way which helped get the Lib-Dems into a position where they could form a coalition.

And then Chris Huhne, who was obviously guilty from day one, but whom Brand Clegg still supported right up to his volte-face on the day of his trial.   Brand Clegg was looking distinctly grubby.

And now the denials about any knowledge of Rennards sexual shenanigans; as if it were at all likely that he knew nothing about them.  And now the weasel words about general and specific allegations.  He is almost saying, ‘Oh yes, we all knew Rennard was a serial sexual pesterer of women, but no-one had given us actual names and dates, so we went easy on him.  After all a man is innocent until there has been a channel 4 expose these days.”

And now Brand Clegg is well past its sell-by date.  Eastleigh could be the final nail.  I am almost willing for the first time in my life for the Tories to win Eastleigh after all.  Best result would be for both the Lib-dem and the Tory vote to fall and for Labour to double its share of the vote.   Even if Clegg does hang on, the local elections in May will be another disaster, and two years out from the next General Election sphincters will be quivering.

But what can follow Brand Clegg – Danny boy, too tainted by the Clegg brush surely, or Vince, old Mr. Reasonable?   Makes you wonder why they ever ditched Ming or even Charlie-boy. 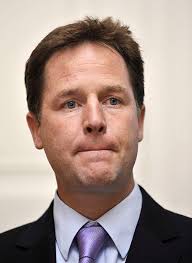