January 1973 saw the release of Don’t Shoot me, I’m Only the Piano Player, Elton’s 6th real studio album….and what a cracker.  For the next few years Elton would release 2 albums a year, several singles and World tours.  He broke not only in America but became a Worldwide phenomenon.  And over the next four years he was truly unstoppable.  So, the album – well, it leads off with another brilliant single ‘Daniel’, which was almost homo-erotic but turns out Daniel is his brother.  This album also I reluctantly admit contains my most unloved song of his – ‘Crocodile Rock’ – which is frankly crap – but still millions loved it, so what do I know. Other favourite tracks ‘High Flying Bird’, ‘Have mercy On the Criminal and ‘Blues For baby and Me’.  A triumph of an album – what could possibly top it….

Well we didn’t have to wait long because later that same year he released a double album “Goodbye Yellow Brock Road” – which for most fans remains their favourite..  but like most double albums it should have been two separate single records.  Saying that – side 1- Funeral for a friend/Love Lies Bleeding’ followed by ‘Candle In the Wind’ and the fabulous ‘Bennie and the Jets’ is probably the best single side of an old-fashioned album ever.  Simply brilliant.  Other great tracks are the title track and Grey Seal’. ’Sweet Painted Lady’ ‘Danny Bailey’ and ‘Harmony’ are all wonderful.  Never liked Jamaica jerk-Off or Saturday Night.  Still an incredible record, inspired by their mutual love of Hollywood– his best seller too.  Almost too much to take in in one go.

Much better for my money was the slightly under-rated follow up ‘Caribou’ (74).  Elton’s producer Gus Dudgeon later slated the record, saying it was rushed, recorded in 9 days and in his opinion a mess. But I love it; from the wicked opener ‘The Bitch Is Back’ to closer ‘Ticking’ it is fabulous. Every song is quality and so different in feel – there are the ballads ‘Pinky’ and ‘Don’t Let The Sun Go Down On Me’, a couple of rockers ‘Static’ and ‘Stinker’ , a lovely bluesy rolling ‘Dixie Lily’ and even a self-penned lyric ‘Solar Prestige Gammon’ (nonsense but a lovely melody).  This is probably my very favourite Elton album.  I can remember when I first heard it too; I had just been for an interview for a new job (which I got) and treated myself to lunch at a new burger restaurant on Oxford Street, and this was playing on the stereo system.

!975 saw another classic album – Captain Fantastic and the Dirt-Brown Cowboy.  This was actually a concept album of the struggles of Elton and Bernie in the late Sixties – though it hardly matters as the lyric’s remain pretty obscure.  The record was less commercial too, only one single – the beautiful ‘Someone Saved My Life Tonight’ which, although you don’t need to know, Elton’s breaking off a disastrous engagement – the someone was Long John Baldry, who persuaded Elton to not give up on his music.  However; the album.  Well, it is good (of course) and yet it seemed to lack some of the pzazz, the glitter of his former 3 or 4 records.  Maybe he was getting tired – who knows.  Anyway, saying that there are still some great songs ‘We All Fall In Love Sometimes’ and ‘Curtains’ stand out for me.  There was also dissension in the band and before his next album Nigel Olsson and Dee Murray were sacked, though they would later rejoin for various tours and albums.  And that next album for me was a low point.

Rock of the Westies (also 1975) was basically a ‘Philly Soul Sounding album).  Elton, like the Beatles before him. and a year after Bowie, was a musical magpie, and was entranced by the softer smooth soul sounds coming out of Philadelphia in the mid-Seventies. He released a single (not on the album Philadelphia Freedom) which was pure soul and also an EP (The Thom Bell Sessions 1979) both of which are okay but not really my style.  But back to the record – well, it just doesn’t really work for me – and was not his biggest seller either. There are a couple of good songs ‘island Girl’ which was a hit single and ‘I Feel like A Bullet (in the gun of Robert Ford)’ (Robert Ford was the bounty hunter who killed Jesse James).

April 1976 saw the release of a double live album “Here and There”, featuring two 1974 concerts – Here was in London and There was in New York.  Both are excellent, while here is almost acoustic and piano-led, there is a full-on band concert.  Great versions of both early and current songs up to Yellow BrIck Road.  The CD version also has 3 tracks where John Lennon came on stage.  Elton had famously visited John while he was recording Walls and Bridges and had played on a couple of tracks.  Anyway a pretty good live album.  So, Elton was king of the world, he could do no wrong, every album went to number 1.  He was in his Pomp….. 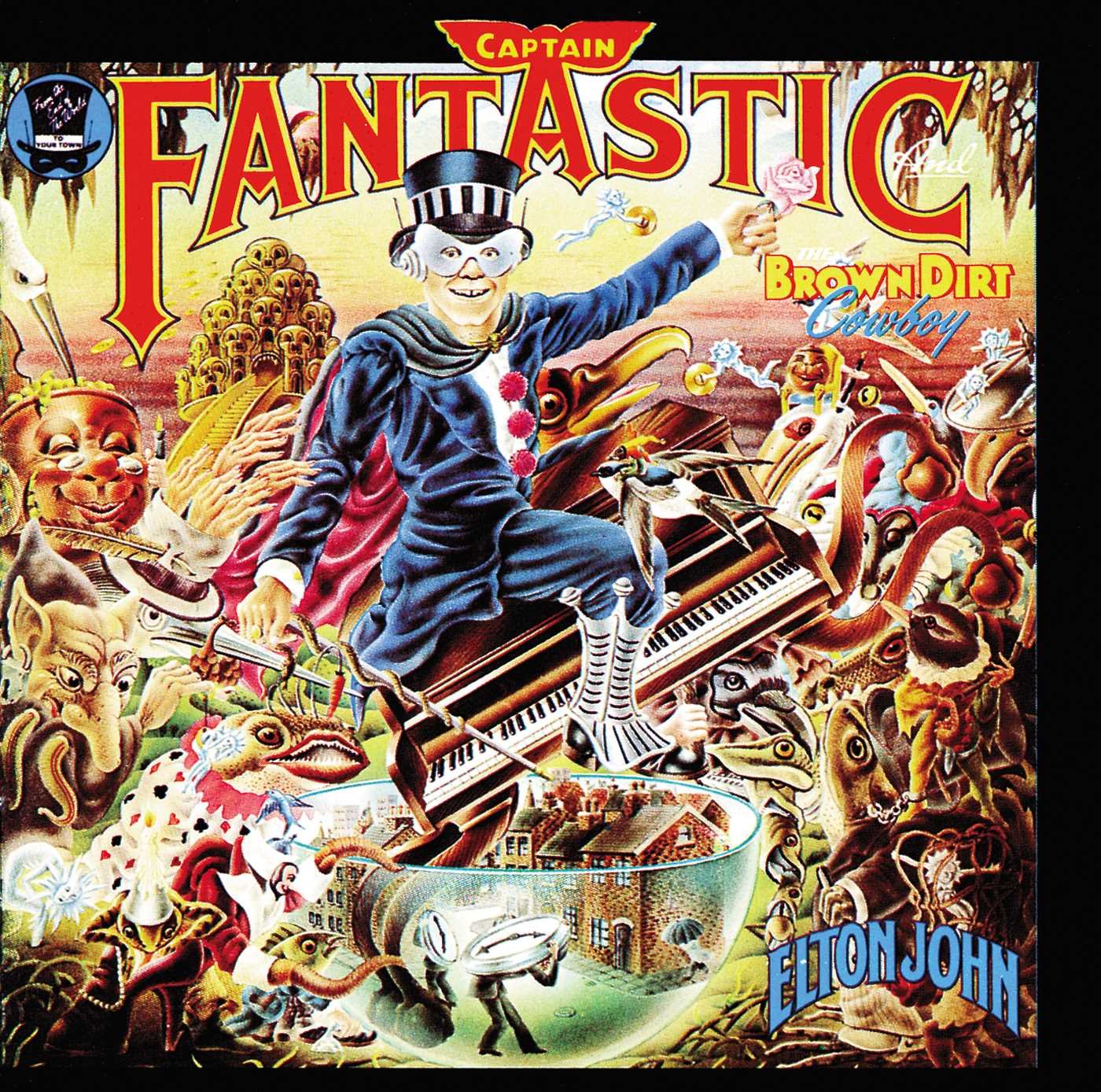