Dylan – Live and other stuff.   Some of these are bootlegs or released radio broadcasts where the copyright is only 30 years or maybe less.  So, not official releases but still pretty damn good.

Bob Dylan and The New Folk Revolution.  This is over half early Dylan songs – no really new stuff, and a collection of Joan Baez, Judy Collins, Dave Von Ronk songs.  Okay but hardly essential.

The Singer and The Song.  A great double album of Dylan and Johhny Cash songs, not singing together but still a good compilation.   I really don’t know how these other record companies get some of this early Dylan material, maybe it is officially licensed – but I am not sure.   Anyway, a great compilation – some early stuff from Dylan too.

Life and Live Only – I think this was an official CBS release of again early radio live performances’ not bad but nothing new or not really available elsewhere.

A Fool Such As I – well, this is again a strange one.  In the early Sixties Dylan fell out with his record company CBS and recorded an album Planet Waves (not his best by a long chalk) with Asylum records.  In retaliation CBS released a selection of poor songs which Bob had recorded but not included in Self Portrait of the previous year.  When Bob returned to CBS the following year this album, simply titled Dylan was buried and not released for many years on CD.  This album, ‘A Fool Such As I’ is basically that deleted record plus, and here lie the buried gems a whole lot of Dylan Cash duets…Whether they ever intended for an album or were just having fun in the studio (2 songs with Cash came out on Nashville Skyline anyway) is unknown but buried treasure it is.

Across The Borderline   This is a live double album of a concert with Tom Petty and the Heartnreakers (see P).  This was mid-nineties.  Bob and Petty toured extensively and several concerts were broadcast on local radio stations (presumably to encourage ticket sales).  Some of these emerged a few years later as live CDs.  See a bit later Decades – an 8-album collection of live sets (4 of which were live Petty/Dylan concerts).  This is quite a good concert with a fair sprinkling of Petty songs.  Bob’s voice is pretty shot though – but as usual I bought it.

Can’t Wait.  Another late 90’s concert – this time with his own band.   I am still not sure about this record, I like some of it – but almost every song is played as a slowish chugging bues, all long versions, quite hypnotic – but ultimately a bit more than boring.  And I much prefer the original arrangements.  Dylan admitted that he was constantly changing the arrangements of his songs trying to find a new way of playing them to keep them fresh for him as the singer.  Oh well.

Decades – an 8 volume set of live discs – 4 of which are different concerts with Tom Petty.  The first two are okay, early radio shows, interviews and songs from a young performer hoping to get noticed.  The four Tom Petty ones are okay but a bit much.    CD2 is especially good, with a very young Bob, almost embarrassed in an interview and not wanting to sing his own songs, he sounds really charming.  Disc 3 is another from The Rolling Thunder Review, not sure exactly which concert but very good as usual.  Discs 3 to 6 are all with Tom Petty and pretty repetitive realy.

Shelter From A hard Rain. .Another broadcast from the Rolling Thunder Tour.  Pretty sure this was from TV broadcast I saw back in very late 70’s.  Anyway, brilliant as usual.  I just love this stuff and can’t wait (but I must) to start in on the mega box set of Rolling Thunder about to be delivered..

Chimes Of Freedom.   Is a four disc set of other voices singing Dylan.  Absolutely wonderful,

In fact one of my very favourite Dylan albums.  Too many great performances to single out any.  This album truly showcases just what a brilliant songwriter Dylan was.  I could listen to these CDs all day long – and I am often tempted to,

Then we come to the various Greatest Hits. I did have the original 1967 release of Bob Dylans Greatest Hits on vinyl, long since transferred into cassette.  As I now own all the early albums there is no need to rebuy it.  Much better was More Bob Dylan Greatest Hits (1971) I reviewed this earlier, it has four new songs which are among his best.  This was released at a time when he was seen as having a run of pretty poor Dylan albums really – but it made me go out and buy them, and now I love them.

Masterpieces – A 3-disc greatest came out in 1978 but concentrates on early stuff – mostly the early 60’s.  I bought this really for 2 tracks which were released in the mid-seventies as a rare single and were never on any album; Rita Mae and They Shot George Jackson Down.  But a good album anyway.

Bob Dylan’s Greatest Hits – Vol 3  (1994) concentrates on Seventies and Eighties.  And it just makes you realise how good he still was.  While the early stuff will always resonate, these later songs were more varied, more complex often and probably worked on harder.  There have been very few artists whose work has been consistently good over the decades.  But Bob was always one to plough his own furrow; sometimes it might have seemed that what he turned up was less rich than at others, but he continues to defy description and to surprise us.

The Real Bob Dylan – 2012.  A triple album, more or less in date order.  No surprises but a couple of live versions.  The Bob Dylan industry is in full swing.  Every couple of years a new compilation emerges, as well as the continuing Bootleg series of rare and unreleased stuff.  There is also the seemingly fading possibility that Bob might actually release something new and original again.  We wait. But I have plenty of Dylan stuff to be going on with I am sure you will agree. 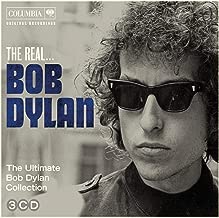