B – Barclay James Harvest – the second of the ‘biggies’.  I have every single album they ever put out, except a couple of compilations where I already had everything on them.  I first saw them, as I did so many bands, at Weeley in 1972.  This was the most incredible ‘pop’ festival ever; two stages; constant music through three days and nights; every semi-decent British band was there, including Faces and T-Rex, Genesis, Lindisfarne, Edgar Broughton, and of course BJH.  Well, I was surviving on a diet of gin and orange juice and ‘slimming’ tablets, and when BJH came on they had a 45 piece orchestra with them (which nearly bankrupted them a year later) and they blew me away.  Absolutely wonderful melodies and superb playing.  The Orchestra complemented rather than competed with guitars and drums.

So, on returning home I rushed home and bought what at that time were their only two albums.  The first is simply titled Barclay James Harvest.  Great songs but a touch bombastic, a little bit naïve.  I still played it to bits, I especially love the last two tracks; ‘The Iron Maiden’ and ‘Dark Now My Sky’.  A few years ago, these first early records were re-released with bonus tracks.  This has about 10 earlier songs which they recorded but wisely did not release, and their first two singles which bombed at the time.  Apparently the band, made up of guitarist John Less and keyboards Woolly Wolstenholme were in one band and bass-player Les Holroyd and drummer Mel Pritchard in another.  They joined forces and spent almost a year in the Yorkshire countryside in an old manor house perfecting their songs and their craft.  All the songs on this record are credited to the whole band, but gradually they would claim individual song-writing credits, the tensions in the band being settled by John and Les having equal songs on each record and Woolly just one or two.  Amazingly they lasted for almost thirty years before splitting, though only coming together to record and tour.  But all in all, their first album was a triumph; there was nothing quite like it,

though the Moody Blues and Yes did add orchestra’s occasionally.  Woolly was always more classical than the others, and was one of the first in England to get his hands on a Mellotron, a hefty and awkward piece of kit which played pre-recorded bits of tape rather than individual notes.  This contributed to their unique sound. 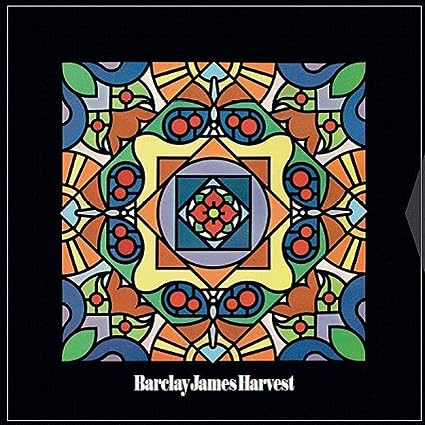