David Crosby – Where do we begin; he was a founder member of The Byrds (see B) and was on their first 5 and the very last album, incidentally a band almost as influential as the Beatles.  He was a founder member of Crosby. Still and Nash (and Young – see later).  He made a trio of brilliant albums with Graham Nash.  He was a complete drug addict, cocaine, heroin, everything.  He has been to prison, he has nearly died twice, has a new liver.  According to Nash, he used to be shooting up between songs.   And he is still going and making new music even now – which I must start to catch up with sometime.  He also has the most beautiful voice – and is a pretty good songwriter.

His first solo album is the wonderful spaced out ‘If I Could Only Remember My Name’ (1971).  This was released just after CSNY’s Déjà vu album and went to 2 in the album charts.  A stellar cast of musicians including Jerry Garcia, and Joni and Nash on backing vocals; David was Joni’s girlfriend until he introduced her to Graham who became her next lover (good luck to them all, wish I had been around then).  The record is very spaced out and jazzy and quite heavy, some great songs, especially ‘Laughing’ and ‘Traction in the Rain’.  It takes me right back to those heady days of discovery in the very early Seventies; I was in London, on my own but a single parent and every Saturday I would spend 30 shillings on a new album (a lot of money back then), I used to go to a small independent record shop on the Holloway Road and all of this stuff was the owner’s recommendations – he was never wrong.

David stopped recording solo until 1989, concentrating on group and Crosby/Nash records.  I caught up with him again by accident when I found Thousand Roads in a secondhand record shop in Frinton.  This was recorded in 1993 but could have been from any time in the last 50 years – the voice and the phrasing and the music is timeless.  Best songs are ‘Hero’ recorded with Phil Collins, ‘Yvette in English’ (a Joni song) and ‘Old Soldier’ – a lovely record.

I also have one live album (though there are many bootlegs around) It’s All Coming Back To Me Now. (1995).  This is another superb effort, with a few new songs and some very old ones too.   David is in good  voice but many of the songs are too long drifting off into overlong guitar breaks.  Still not too bad.

Crosby/Nash.  Graham Nash used to be in the Hollies, but on a visit to America in 1968 he met David Crosby and Stephen Stills at Joni’s house.  They harmonised together and got on really well – fuelled no doubt by copious amounts of hash. Anyway Nash soon left the Hollies and moved to America forming CSN the following year (see later) The band were a huge success, and in the next couple of year each band member released solo albums and Neil Young occasionally joined them live and on record.  David and Graham were particularly close and as well as appearing on each other’s records decided to record together.  Their first self-titled album David Crosby Graham Nash was probably their best.   Full of enthusiasm, Graham’s song burst out at you while David is elegiac and serene.  This album is all part of almost seamless whole in the very early Seventies, After the Goldrush, Songs for Beginners, the CSN album and Déjà vu, Harvest and If I Could Only Remember My Name – this loose group could do no wrong.  Best songs on this one are ‘South bound Train, Page 43 and Immigration Man.  Superb.

Three years later they released Wind On The Water – but despite some great songs the cracks were beginning to show; CSN were constantly bickering and Neil Young joined and left as the mood took him.  The band had tried to record a new album but the sessions broke up in acrimony – too much cocaine I suspect.  So Nash and Crosby made their second album.  It is okay, but the songs seem weaker to me, not as exciting as their debut.  Still it is nicely sung.  Best songs ‘Cowboy of Dreams’ and the final song ‘To the Last Whale’.

The following year after another unsuccessful attempt at a CSN album the duo recorded their third record Whistling Down The Wire. Well, this seems much better – the songs have better harmonies, the words stick in your brain better and it hangs together nicely.  Best songs – ‘Spotlight’, ‘Marguerita’ and ‘Broken Man’.  And that was it, at least for a very long time. They released a very good Live Album in 1977 – very good renditions of favourites with a couple of new songs.   Both Crosby and Nash continued to work sporadically with CSN and Neil Young.  A few tours and break-ups and re0unions.  Until, suddenly in 2004 a double album appeared simply titled Crosby and Nash.  And it is really very good – except it is far too long and after a few songs it all begins to blur into one slightly soggy hippy ramble.  Some good songs though, many of Crosby’s written with his son, who he now makes records with (must catch up some time).  I cannot really pick out favourite songs, because there are so many, but ‘Through Here Quite Often’ and ‘Penguin in a Palm Tree’ stick in my mind.  Had this been released in the early or mid-seventies it would have been massive, but times have changed and most of their fans have moved on, even me really. 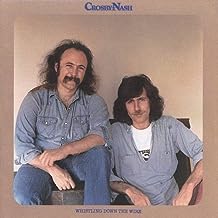