The sad news of the death of ‘Lonesome George’ has shocked and upset me.  He was the last living member of the sub-species of giant tortoise known as Pinar.  George didn’t particularly seem to mind being the last of his line, as he studiously refused to mate with females of similar sub-species, preferring to keep himself to himself, and presumably to withdraw into his shell whenever the mood took him.  So, another splendid large land animal has disappeared, though there are still quite a few other varieties of giant tortoise around, at least for the time being.  But it made me think; what if we are all the last surviving members of different sub-species of humans.  And even reproduction will simply create another sub-sub species.  Because at the end of the day, and at the crack of dawn too, we are, despite being surrounded by others, all alone.  We are all the last unique example of sub-species ‘Catherine Latimer’ or ‘jane Wilkinson’ or ‘john Smith (version 6, 547,321).  Each one of us is different and in a tragic way all alone; despite our desperate need for the company of others, we can never be sure if anyone else actually exists, or if everyone else is nothing like us at all.  They do not think in the same way as us, they do not suffer pain the way we do, they do not have the strange notions that we have.  Like ‘Lonsesome George’ we are all just lumbering alone, occasionally distracted by a lettuce plant or a passing cloud, but essentially all alone.  And we go through life pretending to understand the world and other people, but barely have the capacity to understand ourselves.  Distant relations though we may be to ‘Lonesome George’ with his passing at last we are truly all alone. 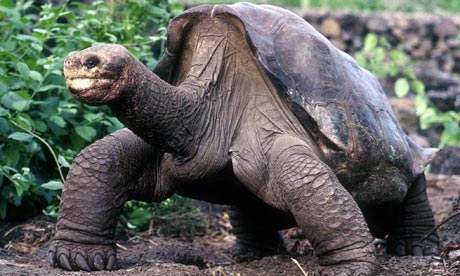