Elton – The Nineties and Beyond

Strange to think that thirty years have passed….and over fifty since Elton’s first album.  Where does the time go, indeed.  So, into the Nineties Elton sailed, rock royalty – and yet no longer really relevant.  But he simply couldn’t stop making music.  1993 saw Duets, where he sang alongside (but with modern technology I doubt that really happened) many famous and a few modern artists. He had a hit with Kiki Dee (True Love) but there is no real cohesion to the album.  Still, it isn’t his worst – by far.  Best songs – the slightly earlier duet with George Michaels (Don’t Go Breaking My Heart), Tammy Wynette (A Woman’s needs) and of course the best track on the album – Leonard Cohen (Born To Lose) which is a private LC joke of course.    Made In England came out in 1995.   Not a bad album at all, but far from his best.  A few good songs – ‘Believe’, ‘Made In England’ and ‘Belfast’ – but overall the record leaves me flat.  Two years later The Big Picture crept out and really should have been left on the studio floor.  Despite 2 strong singles ‘Something Aboiut The Way You Look Tonight’ and ‘Live Like Horses (with Luciano Pavarotti) the album lacks any identity, any soul and any real feeling.  The end of the Millenium saw 3 soundtrack albums, only one of which I bought – Aida.  Lyrics by Tim Rice and a humourous take on the classic Opera have created a different Elton album altogether.  Only a few of the songs are sung by Elton, and a host of other semi-famous singers fill out the score.  Not sure if I really like it, but then I am not a great fan of musicals anyway. 2001 saw  an album inspired by Ryan Adams, ( see A) an American singer songwriter of great promise.  Elton and Bernie really tried to sound new and relevant – and in part they succeeded.

Songs From the West Coast – arrived in 2001, and it was a great album.  Not quite as good as the Seventies classics but a fine collection of good songs.  The album did a lot to restore Elton’s criticical reputation and sold pretty well too.  It is almost impossible for those artists from the Sixties and Seventies to sell in anything like the numbers back then, but Elton did well with this record and had 2 hit singles ‘I Want Love’ and ‘This Train Don’t Stop Here No More’ – but really not a bad song on it.  My favourites ‘Look Ma, No Hands’ and ‘Original Sin’.   He followed this up with Peachtree Road  (2004), which although critically well-received sold quite poorly.  I quite like it, but it doesn’t have quite the warmth of it’s predecessor.   Still, not a bad record at all.  Fave tracks ‘Porch Swing In Tupelo’ and ‘My Elusive Drug’.  The albums were coming slower now, which may have been a good thing.  The Captain and The Kid came out in 2008 and it was very good; an obvious reference to their Seventies Brown Dirt Cowboy album.  A continuation, in that many of the songs are autobiographical – not that that matters.  One sort-of political song ‘Postcards From Richard Nixon’ and a couple of references to friends who died in the Aids epidemic.  Like it’s two predecessors this has a stripped down sound with no orchestra or jazz section.  Some very good songs too – ‘Tinderbox’ ‘Just Like Noah’s Ark’ and the title track.  And that leads us to my last Elton record (well, not quite as I have just ordered and ma waiting to listen to his last 2 albums) The Union (2010) – a collaboration with Leon Russell (see R).  Leon wrote a few of the songs and there was some collaboration on a couple of others, the majority were written by Elton and Bernie.  Producer T. Bone Burnett brought a Southern sensibility to the sound of the record which is lovely.  A really good record, but as much a Leon as an Elton.  Best tracks, the title track and ‘800 Dollar Shoes’ – but really not a bad song on it.

And apart from the obligatory Greatest Hits – that is that.  Mind you – what a Greatest Hits.  In terms of poular music Elton ranks with the best. 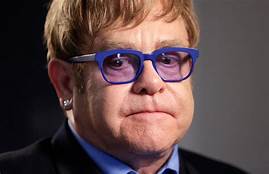