Elton John (early days) – well they don’t come much bigger than good old Reg.  And only a handful of Artists are known by one word ELTON.   Elton was in a band Bluesology which I have no music from.  He was teamed up with a lyricist Bernie Taupin by Dick James in the late 60’s – the rest is History.

Elton is a veritable melody machine but has always relied on others for words to his songs.  Usually with great success.  First up is a real oddity – Elton was given the task of making cover versions of current hits as a jobbing singer and pianist.  I picked up these tracks Legendary Covers on 2 free CDs given away by I think the Express.  They are rubbish – but they are Elton.

His first solo album (with Bernie) was Empty Sky (69).  I only bought this after his second self-titled one.  It is quite good actually and I have learned to love it.  Production is a bit clunky but good singing and best songs are ‘Val Halla’, ‘Lady, What’s Tomorrow’ and ‘Skyline Pigeon’ – plus a bonus track of early version of ‘Grey Seal’.  Not a bad start.  Elton John followed the next year and the improvement is incredible.  The production is sweet with great orchestration and some heavier rocking numbers. The first song ‘Your Song’ is possibly the best thing he and Bernie ever wrote and is actually unlike the rest of the record, which is mostly bluesy rock. Some great songs in here though especially ‘take Me To The Pilot’ and ‘No Shoestrings On Louise’ – but I also love ‘First Episode at Hienton’. Your song was a hit and Elton was on his way. Album number three was Tumbleweed Connection and is a country blues album released later in 1970, almost a concept and stands alone in his albums really.  It is of course brilliant too.  In fact I really fell in love with this album and it’s unique blend of Americana and rock.  And for almost the only time in his career Elton did a cover  – ‘Love Song’ by Lesley Duncan (see D), who for a while sung backup vocals in his band.  Dee Murray, Nigel Olssen and Davey Johnstone were now regular players on his records and live.  Best songs; ‘Country Comfort’ (covered brilliantly by Rod), Where To Now, St. Peter’ and ‘Burn Down The Mission’.  The album was a hit despite not really having a single.  Elton was now established as a rising star among the slew of singer-songwriters breaking as the Seventies swung into view.  1971 saw a Soundtrack album ‘Friends’, which I (much later bought, but was quite unmoved by) – only a handful of weaker Elton songs.  But also a live album 17-11-70.  Not at all bad, and a pretty good record of Elton’s early live shows. I didn’t see him around this time, but have been to about three live shows as he became more famous.  There are some cracking versions of ‘Burn Down the Mission’ and ’60 Years On’ and even a cover of the Stones ‘Honky Tonk Woman’ (On album it is singular, not plural.   Actually the original album was much shorter but it was expanded on CD to include much longer versions.

1971 saw almost my favourite Elton album, the superb Madman Across The Water. Wow, what an album, great cover and all.  I bought it on the day it came out and it has remained one of my very favourite albums.  I fell in love with the song ‘Levon’, which may or not have been inspired by Leon Russell, who decades later Elton made an album with.  The title, at the time was thought to refer to newly elected Nixon, though this was denied by Bernie who wrote the song.  The first song ‘Tiny Dancer’ has become a live staple though it was ignored for a few years by Elton.  But I like all the songs; the words seem more worldly, and Elton’s singing has never been better.  The band were also gelling together, almost instinctively, to form the ‘Elton John Sound’.  Other classic songs on the record are the title song, which was recorded for Tumbleweed’ but then re-recorded for this album and ‘All the Nasties’.  But as with most of these early records there isn’t a poor song among them.  I have written before about early Seventies attempts to marry classical and rock, but Elton did it brilliantly; Paul Buckmeister arranged orchestra brilliantly on all of Elton’s early records, so brilliantly that you barely notice it – which is the skill of the thing.

A year later and Elton and crew decamped to France to record ‘Honky Chateau’.  Well, despite having two of his best songs on it, this record didn’t seem to quite work.  A bit too jazzy, too noisy – but then, on reflection – and as so often – on revisiting this record I realise what a great album it really is.   Elton was on the cusp of absolute stardom – he was simply getting better and better and would soon have a rush of hit singles.  So – the album, a tongue in cheek opener ‘Honky Cat’ the incredible ‘Rocket Man’ (maybe my favourite single) and the lovely ‘Mona Lisas and Mad Hatters’ – not to forget ‘Salvation’ and well, take your pick – there ‘ain’t a poor song on the record. World domination was soon to follow…… 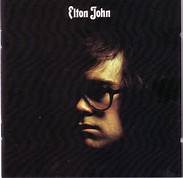