Easy All Stars – The Dub Side Of the Moon – Ha. Well this was bought for me by my oldest daughter in an attempt to convert me to ‘Dance Music’. She does this quite regularly and mostly I like the stuff she chooses for me; I in my turn try to interest her in earlier singer-songwriter stuff to much less success.  Anyway, this is quite a fun record, a re-recording of reggae versions of the famous Pink Floyd album.  Pleasant enough.  She also bought me Sergeant Peppers Dub Band – also by Easy All Stars,  Not so successful this time, or maybe one album was enough.

Eels – A band built around singer Mark Everett, known as E.  Almost every song is about hardship, misery, depression and real or imagined wrongs in the world of E.  I must say I quite sympathise, and miserable bugger that I am I love this depressed stuff.  The singing and music is absolutely first class too, the sings are all excellent and his sad sad voice almost deadpan and barely sung hits the button every time.  I first got into the band (or the man) when I bought a CD single (as I have with so many others).  It was from an album Beautiful Freak (1996). This was officially the debut of the Eels and really has never been bettered.  It is strange how certain songs have such relevance; one of my favourites is ‘Susan’s House’ – and at the time I was dating a woman called Susan and used to love playing on repeat this song on the long bus journey to her house.  Other great songs are ‘Novocaine for the Soul’ and ‘My Beloved Monster’.  But this is one of those lovely records that when you revisit it feels like an old cardigan you love and slip on to keep warm on a wintry day.  I have only bought Eels records sporadically since then (there have been quite a lot of them).  Next up is Daisies Of The Galaxy (2000).   Again, some great songs but without quite the shock value of his debut but good even so.. Favourites – ‘Birds’ and ‘Jeanies Diary’.   Not a bad listen at all. Souljacker followed in 2002.  This seems a more hard-rock album, moving away from the slightly pop feel of his earlier records.  The vocals seem as though they are sung through a grungy layer of smog.  This may well be my least favourite Eels album, no tracks really stand out except maybe the opener ‘Dog Faced Boy’.  But the Cd did come with a four-track live extra CD which is pretty damn good.  I was sort of thinking of giving up on the band but the reviews for a new album were so good that I bought ‘Blinking Lights and Other Revelations – a double album released in 2005.  And it is much better, more like his first two records – more poppy, more quirky, but being a double it suffers – as they almost all do from getting a bit boring.  Best songs ‘Trouble with Dreams’, ‘Railroad Man’ and ‘Hey man, Now You’re Really Living’.  And strangely for an album of 30 plus songs not much else sticks in the brain.  There are a lot more quiet piano tinkling songs, much less anger and more reflections on life – this almost would befit an old man’s record and yet Everett could not have been much past 40 when he recorded these songs. So, more or less a miss of an album.  So I more or less gave up on the Eels.   Maybe I will but them again sometime – but not for a while I expect.   I did pick up a live album Eels With Strings At The Town Hall  which is excellent, almost acoustic versions and includes a great version of Dylan’s ‘Girl From the North Country’.  And so far that is it from a great little band. 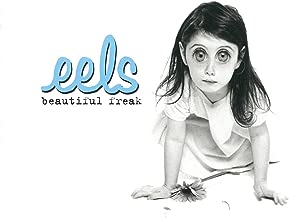