Volume 7 – No Direction Home – this was linked to a film by Scorcese, which was actually beyyer yhan the CD as it had a long interview with Dylan.  The album is a bit of a ragtag of alternate and rare live tracks of Dylan up to 1966.  Interesting but not really essential.

Volume 8 – Tell-Tale Signs.  Not so bad.  This focuses on alternate takes of albums from ‘Oh Mercy’ to ‘Modern Times’.  Pleasant listening but again not really adding anything to the story

Volume 9 – The Witmark Demos.  These were tapes which Dylan made at his music publisher’s Witmark.  They were on tape and were very simple one take renditions of Dylan’s compositions – many of which were never recorded in the studio.  An incredible treasure trove – and a completely relaxed Bob, chatting in between songs and breaking down and abandoning a couple too.  Too many brilliant songs to really pick any out – but a great listen – you really feel as if you are in the room with Bob.  One of the very best of the Bootleg series.

Volume 10 – Another Self Portrait.   These were out-takes of songs and other tracks, never released,  for Dylan’s most mis-understood album .  Also a few out-takes from Nashville-Skyline and even New Morning songs.  All I can say is I love this stuff.  It sounds genuine, honest and is a different low-key Dylan, where the quality of the songs shine through.  Some of the songs are originals, discarded like so many others, some are obscure folk songs that Magpie Bob collects and some are old standards.  Doesn’t matter – a really nice treasure trove of stuff.

Volume 11 – The Basement Tapes Raw.  Well, I didn’t really like The Original Basement Tapes which are from 1967 to 1969 but released in 1975.  Too many throw-away songs with childish lyrics and bad production.  To be honest this isn’t that much better, though more songs, some of which appeared on later albums.  But not my favourite period – still, ever the completist I had to have them.

Volume 12 – The Cutting Edge.  These are out-takes from 1965 and ’66. , from the albums gighway 61 and Blonde on blonde a few earlier songs.  Alternate versions of some of his greatest songs and a couple that didn’t quote make it too.   A great albukm but with few surprises really, many of the alternate takes are quite similar to the finished ones.  But an enjoyable listen anywyay.

Volume 12 – Trouble No More.  This was a double CD (as most of the Bootleg series were) of live songs from Bob’s “Religious” period.   Never my favourite run of albums – though Slow Train was brilliant, I didn’t really like Saved.  Mind you, if you can discount the overtly political messages in the lyrics, the tunes are pretty good.  These live versions are classic rock’n’roll style which Bob had drifted into in the late 70’s – with a big band, horns and a girlie chorus.  Still he is in brilliant voice on these live tracks.  And there is a conviction in his voice that is unmistakable.  A handful of rarities too – but ultimately this is not among my favourites – it is almost pure gospel with call and response choruses.  Too much preaching.  Still.

Volume 13 – More Blood, More Tracks.  And I haven’t even listened to this yet  – too many other live records…. 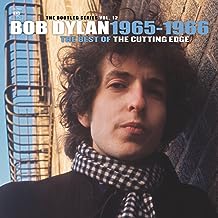