In 1992 a ‘new’ Dylan album came out.  It was a triple and called The Bootleg Series – Voliume 1-3.  There had been quite a few bootlegs of early Dylan recordings and concerts so CBS decided to trawl through their archives and produce their own well packaged and cleaned up bootleg.  Over the years this has continued.  I have bought every one – some excellent, some not quite so good.  But they have charted an alternative Dylan.  He was notorious for rejecting songs and recordings which he felt weren’t right and many tracks were simply discarded in his headlong trajectory.  The first 3 albums are quite special, as they are mostly new or unheard songs.

Volume 1 is mostly very early stuff.  A few live versions and some great ‘talking blues’ songs like ‘Talking John Birch’ and ‘Great Bear Mountain Picnic’.  And most of the tracks Bob rejected (at the last minute) from his Freewheelin album.  This, admittedly long disc would have made two great single albums back in the early 60’s.   It seems Bob was writing songs almost daily and could afford to discard so many; The Beatles by contrast recorded almost every song they wrote.

Volume 2 – takes us through to Blood on the Tracks.  Again some great number simply left off albums and a few different versions.  Best songs ‘Mama You Been On My Mind’ and ‘Farewell Angelina’, and ‘I’ll Keep it With Mine’.

Volume 3  – is the late Seventies and the Eighties.   Again, almost unbelievable that such great songs were just left along the way – ‘Golden Loom’, ‘Tell me’, ‘Foot of Pride’ – and best of all ‘Series Of Dreams’ – especially when many of the records he was releasing in the Eighties were pretty dire.  Oh well.  And at least we have them now.

Seven years later and we got Volume 4.  This is the legendary 1966 Royal Albert Hall Concert, when Bob did half the show Accoustic and then brought on the band for hard rock and roll.  It is famous for the ‘Judas’ shout from the audience and Bob’s reply ‘I Don’t Believe You’.  In fact this show was recorded at Manchester Free Trade Hall, a few days before the RAH show.  It had been bootlegged in poor sound quality, but this release was from the soundboard and is crystal sharp and brilliant.  As a record of just how exciting Bob could be live it is hard to equal.   It is also quite hard to realise that this was in 1966, when the Charts were full of pretty ditties and soft ballads.  I am not saying that Bob invented Rock, but he certainly laid out a pretty good template.

Volume 5  – is a live concert from the first leg of The Rolling Thunder Revue in 1975, when Bob went on the road with a collection of musicians, Joan Baez, Joni, Mick Ronson and Roger McGuinn.  He had released Hard Rain in late ’76 which was from the second half of the tour and is generally considered a bit weaker.  A great double CD, very exciting and simply superb versions of many of his classic songs.  A great short solo set from Joan too.  Slowly these few concerts and the two albums which preceeded it are being recognized as almost a second wind.  In fact in many ways this was even better than the Sixties stuff; the songs were more mature, the melodies subtler and this period is definitely my favourite.  In fact I have just ordered a 14 disc box set of Rolling Thunder with lots of rehearsal stuff and different songs on different days….can’t wait to start listening to it.

Volume 6 – Is a Halloween solo concert 1964 with a guest appearance form Joan Baez.  Bob was in the first flush of real success; he was still the darling of the Folkies, he hadn’t gone electric yet.  And he was brilliant, so accomplished, so comfortable, so good.  And funny.  Yes, he was really funny, laughing between songs and even when he forgot the words to one of his songs.  The audience loved him – no chants of Judas this time, just adulation.  A great set with quite a few of his early songs.  A great record, which had been planned to go out officially but was pulled because Bob was writing and recording so much other stuff in these early years.  Best song – ‘Mama you been on my mind’ 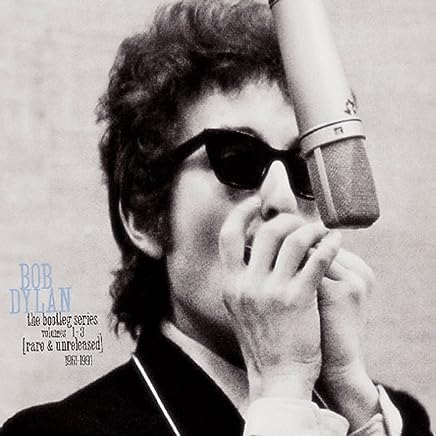