Dylan – The Drifter Did Escape

Almost 18 months and no new Dylan album, no live shows, no news at all.   But late in ’67, the year of hippy music an album slid out with little fuss at all.  John Wesley Harding was the title, and a boring blurry black and white photo cover.   And the most startling thing was the new voice, the new style; no more raucous rock’n’roll, no more snarling put-down songs, but a gentler, maybe more philosophical sound.  And the songs were full of religious imagery and outlaws, and seemed from far further back in time.  Almost a timeless folk sound with very few choruses, no more emphasizing certain words, and the songs are almost a piece – as if they were a song cycle.  The public were bemused – they wanted another Blonde on Blonde, they craved the wild poetic imagery, they wanted the old Bob back – but they would have to wait several years for that.  Actually, I now love this album, this religious-sounding slower Bob Dylan – the songs themselves drift in and out – it is the overall sound, the mood of the album I love.  I have stopped second-guessing his motives – maybe he was trying to lose the Messiah mantle – testing us possibly, or did he just feel like a change.  Most probably he was, as always, following his muse.  Favourite songs ‘All Along The Watchtower’ soon to be immortalized by Jimi Hendrix, ‘Drifters Escape’ ‘I dreamed I saw St. Augustine’ and ‘Frankie Lee and Judas Priest’  (so that’s where they got the name from).  The album closes with two different style songs – pure country ballads, of which ‘I’ll Be Your Baby Tonight’ is the best and has been recorded by many artists.

So Bob – where to now?  The last two songs were the pointer.  Nashville Skyline followed a year later – though in a time line the Basement Tapes were laid down around the same time.  These were ‘home recordings’ made with the Band – his recent backing band at their house in upstate New York.  Trying to find a new Americana, mixing old styles with mostly nonsense lyrics.  The album came out (by popular demand) in the late 70’s but it had been bootlegged already, and was even one of the Bootleg Series, which came out this century as Dylan and his admirers searched the archives.  The official album is quite disappointing really; but interesting if only to see what Bob was doing while not appearing live anywhere.  To be honest this is a waste of time as an album – but the public were desperate and CBS cashed in.

But in ’69, eighteen months later, Dylan confused us even more by going completely country with Nashville Skyline. I loved this record though; I think the thing that shines through, as well as the very professional playing and Bob’s singing voice which was suddenly incredibly good, was the quality of the songs. By any standards this was a brilliant country album, especially as Johnny Cash joins him for 2 numbers. Played by Nashville session stars the songs are deceptively simple, and yet as ever with Dylan, therein lies their brilliance.  The big hit ‘Lay Lady Lay’ has very few words but is incredibly catchy – try not singing along with it.  My favourite track is ‘I Threw It All Away’ – a tragic song of love lost.  So, what was Bob up to; was he trying to lose his fans, or show us another side, or did he just follow his muse and sing this batch of songs in a country style.  Whatever he was thinking it was nothing to the album which emerged a year later.  Self Portrait was another double – but this was a million miles away from Blonde on Blonde.  There were a few new songs, sung very much in a traditional country/folk style; some sung twice.  An instrumental ‘Wigwam’ which has a brilliant melody (why no words, Bob?), a couple of poor live performances from his appearance with the Band at The Isle of Wight the year before, and a few covers, some done in a traditional syrupy arrangement, some brilliant.  A complete mixed bag with apparently no cohesion or sense to it.  At first, I like many others couldn’t get to like it, but now it is simply sublime – in all its imperfections.  I think Bob was simply saying – “This One Is For Me”.  It was just what he fancied doing at the time.  Maybe he had writers block, but I don’t think so at all.  This was deliberate.  Critics slated it, (What is this shit – declared Rolling Stone) but slowly it has gained approval and sits proudly in his canon.  My best moments – the sublime opener ‘All The Tired Horses’ with it’s one line refrain and beautiful arrangement; ‘Early Morning Rain’ – where Dylan sung so sweetly; ‘Copper Kettle’ a song about illicit whiskey making; ‘The Mighty Quinn’ which was a big hit for Manfred Mann (see M0; The instrumental ‘WigWam’ – but best of all was ‘The Boxer’ where Bob sings Paul Simon’s song in two voices, not quite synchronized, overlapping each other, like some amateur duet – but it works incredibly well.  Strangely this has grown to be a real favourite of mine.

Later the same year he released New Morning, which looked like a new beginning.  But before that we have to look at a record which CBS put out in 1974, when Dylan moved labels for Planet Waves (see later).  It was simply called Dylan – and has long been unavailable.  It was tracks which Dylan maybe recorded for Self Portrait but rejected.  I have the tracks on a record called A Fool Such As I, which also includes tracks which Bob recorded with Johnny Cash around the same time.  It is again quite interesting; it seems Bob was taking a break from the serious business of being a Star and just enjoying himself making any music he fancied.  The cover versions which originally made up the Dylan spoiler album are not really so good, maybe they were abandoned early takes, or simply warm-up songs.  Whatever, this was not an officially sanctioned Dylan album and when he returned to CBS they deleted the album and it hasn’t been officially available on CD.  But the handful of Cash/Dylan songs are a different matter altogether; Cash had sung a duet on Nashville Skyline, and they obviously recorded a whole batch of mostly Cash songs at some point in the late Sixties.  One has to ask why he didn’t make an album of these obviously single takes – but then, part of the appeal of Dylan is his lack of ever being obvious.  A nice record however.

Just four months after the poorly received Self Portrait came New Morning.   This was perceived at the time as a return to the Dylan we loved in the mid-sixties.  But it wasn’t really.  There are a handful of decent songs and quite a few under-par ones.  But at least Dylan’s voice was back to its normal nasal tone, and all original songs too.  Best are ‘If Not For You’, the title track and ‘Winterlude’  The whole record feels very much a downer though, no real enthusiasm at all.

So in four years we had quite a variety of styles – and none quite sounding like the old Bob Dylan.  When, if ever, would he return?  And then there were three years of almost total silence…. 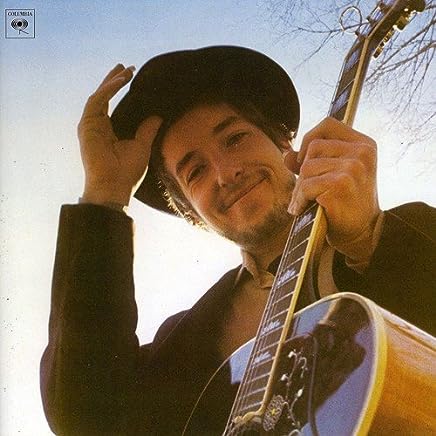