Cockney Rebel – This group, the creation of lead singer and songwriter Steve Harley ( see H), burst onto the scene in 1972 or maybe it was ’73.  Anyway.  Heavily influenced in their style by Bowie – make-up and brilliantly designed satin-lapelled dinner jackets, but musically far more unique.  And Steve had a very sarcastic pronounced vocal delivery, instantly recognisable.  Featuring a resident electric violin and for the first 2 albums a full orchestra on most songs, they were certainly different.  In their way almost as influential as Bowie and T Rex, who the music press lumped them in with; I think they probably influenced Roxy too.

I bought the first album The Human Menagerie after hearing the incredible single ‘Sebastian’, which though never a hit was played on Radio 1 a lot.  To say I had never heard anything quite like it, is a cliché – but almost true in this case.  The songs were, to say the least, weird.  Sebastian itself is about – well I really don’t know despite thousands of listens.  There were very short songs like ‘Chameleon’ which builds and then stops; a couple of rockers – ‘Crazy Raver’ and ‘Mirror Freak’; and the piece de resistance, the final track ‘Death Trip’, which despite the title is quite an optimistic lyric (maybe); this song is a tour de force, a mini-symphony with grand swoops of strings and brass, choirs and recurring themes and at least three great melodies.  It remains one of the all-time classics and possibly my favourite Cockney Rebel album.  I saw them a few times with Joybells and we both loved them.  And still barely anyone knew about them.  This is often the most exciting period for both fans and band.

Within a year they released a second album – the much rawer ‘The Psychomodo’. This one spawned the hits ‘Judy Teen’ and ‘Mr. Soft.’, but overall it is not such a likeable record; too many shouty songs with no charm to them.  The record is saved by two classic songs; ‘Cavaliers’ and ‘Tumbling Down’ which resurrect the orchestral sweeps and great melodies of the first album.  But already the cracks were appearing and the band more or less revolted. Harley either let them go, or sacked them, depending on who you listen to.  There was no doubt that he was incredibly arrogant, and although a great songwriter he obviously had a higher opinion of himself than most of the music press, who he pissed off royally.  Mind you the departure of the band inspired him to write his biggest selling song ever – ‘Come Up and See Me (Make me Smile)’ which became a number one hit and is a favourite on the radio still.  Steve’s next record, The Best years Of Our Lives, credited now to Steve Harley and Cockney Rebel had a completely new band except for the drummer.  It is certainly better than Psychomodo, but there is no orchestra now at all and the songs, though good seem to lack something.  Maybe I am just being hypercritical.  Best songs ‘It Wasn’t Me’, ‘Panorama’ the title track – and of course ‘Come Up and See Me.’  And of course as so often happens – listening again, this is really quite a good record.

Album number four soon arrived – ‘Timeless Flight’.  And suddenly all the bombast and posing was over; this was almost a grown-up record; quieter, more reflective and actually really good.  Best songs are ‘Red is a Mean Mean Colour’, ‘All Men Are Hungry’ and the classic ‘Nothing Is Sacred’.  But the whole mood of the record is almost gentle, more slow numbers – and his vocals are better too.  Steve has (at a concert I attended) almost apologised for this record; no need to apologise – it is great as it is.

Later the same year and the last real Cockney Rebel album came out ‘Love’s A Prima Donna’.  The addition of Duncan Mackay, who later joined 10cc (see T) deepened the sound and two tracks are practically instrumentals and down to Duncan.  Steve returned to full on rock/pop group with this, which turned out to be the last official Cockney Rebel album. Some good songs overall and a splendid cover of George Harrison’s ‘Here Comes The Sun’.  Best songs – the title track and ‘Love Compared To You’.  But on the final track ‘Is It True What they Say’ Steve enters a world of his own adoration and disappears up his own arsehole….

Which is apposite as after this he went solo, dropping the Cockney Rebel completely.  And apart from a couple of cracking live albums and compilations – that is it from Cockney Rebel – at times the glammest of the glam, and a great little band. 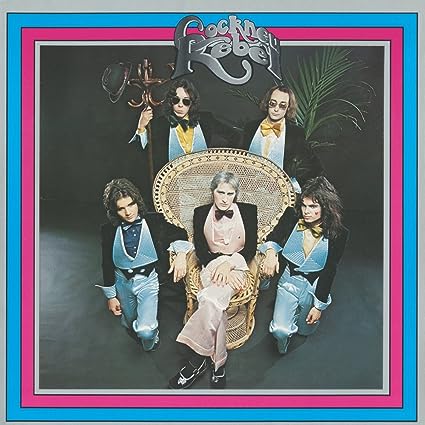