Well, 1969 was a pretty crazy time for The Beatles.  Their hastily created company (to replace Brian) Apple was in chaos, as they were really.  Desperate to get the band (which had stopped touring two years earlier) active, Paul suggested a film of them rehearsing their next album, with the idea of a concert at the end.  But the film only served to expose their bickering and differences, with George even walking out at one point.  The film eventually came out but the songs recorded in a different studio and with, (John’s choice) Phil Spector, in the producer’s chair became the album Let It Be.  This was released in 1970 after the band had actually broken up, so I am reviewing it in this order.  It was in fact the first album of theirs I actually bought, begging and borrowing and taping some of their earlier records.  When I finally got a record deck of my own (after a few disasters, the birth of my son and my marriage breaking up) this was one of my first purchases.  Then I worked backwards. Anyway the record is quite good; the songs are good anyway.  Paul had the classic title songs and ‘The Long and Winding Road’, George wrote ‘For You Blue’ and John had ‘Across the Universe’.  But listening now it still feels unfinished somehow.  Paul apparently hated Spector’s production, and one cannot help but wonder what it would have sounded like if George Martin had produced it.  But anyway, it is what it is. My favourite bit is John saying ‘And I hope we passed the audition’ right at the end.’  12 songs and only 35 minutes long.  Many years later Paul arranged for the album to be re-produced (see Let It Be Naked later).

Abbey Road was recorded in 1969, the last record they would record together.  It came out before Let it be because nobody was really happy with either the film or that album.  It was a return to brilliance, not that they had ever strayed that far away.  It is many fans favourite.  I do like it, but am slightly embaressed by ‘Maxwell’ and ‘Octopus’.  It is side 2 that was the gem.  After the brilliant George composition ‘Here Come The Sun’. we have a few short songs, some mere snippets (maybe left over from the White album) but they are segued together as almost one continuous song cycle climaxing with the superb ‘Golden Slumbers’.  The two codas, (if you can have two) ‘The End’ and ‘Her Majesty’ made many think that they knew this would be their last record.  But they all later insisted that though the recording had been sporadic and fractious it was only a week before the album’s release that John finally confirmed that he was leaving.  The other three immediately decided to break up the band too.  Mind you at 45 minutes they had exceeded any of their earlier discs.  But in a way this worked to their advantage.  Sometimes you do feel you are wading through albums as they approach 80 minutes in length nowadays. 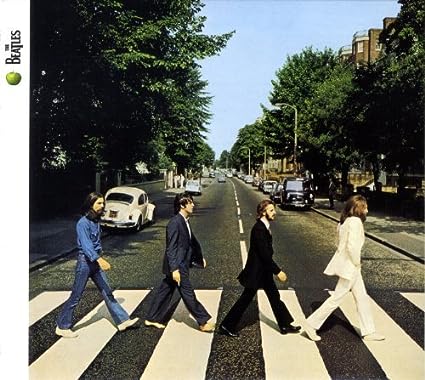